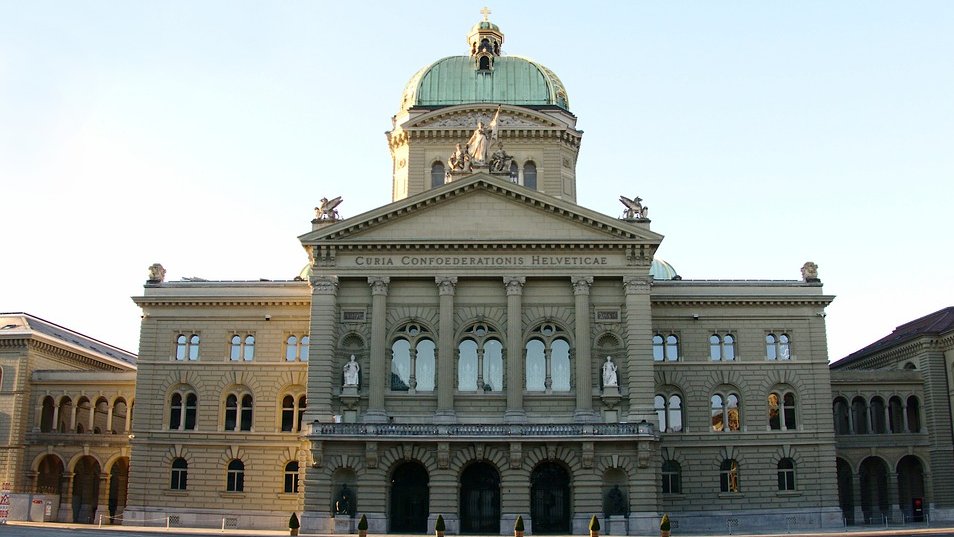 In addition to direct democracy, this construction leads to a uniquely high level of trust in the "non-government" and to a completely different role for the political parties. This could be a suitable model for the EU.

The election of the Federal Council

The seven Federal Councillors are elected individually every four years at the constituent joint meeting of the Federal Assembly. This consists of the National Council (200 deputies - corresponding to the national parliament) and the Council of States (46 representatives of the cantons of Switzerland). Any Swiss citizen can be elected. A recall is not possible. If a Federal Councillor resigns, a successor from the same party is elected in his/her place.

The chairman is the Federal President. He/she and his/her deputies are re-elected annually by the Federal Assembly and are not to be re-elected immediately, not even as deputies.

Since 1943, Federal Councillors were voted according to an agreed formula, which is today called the "magic formula". Currently, two representatives of the SVP (right-wing populists), two of the SP (socialists), two of the FDP (liberals) and one of the CVP (Catholic conservatives) are elected. Small parties with less than 10% support such as the Greens, the Green liberals and the BDP (democratic citizens) are not represented. There is also a proportional representation according to languages and religions.

The magic formula is not part of the constitution, but has become common law in the last 70 years. The distribution formula is not compulsory, but will be agreed upon repeatedly if necessary. If there were relevant shifts in the voting results, the formula was adjusted accordingly.

The National Council elections last October, for example, saw electoral shifts that triggered a discussion about changing the magic formula. The Swiss Green Party had gained more than 6 percent and is thus stronger than the CVP, but according to the magic formula, it is not allowed to present a Federal Councellor. The debate showed that the function of the formula is not only to project the proportional representation of the parties in the National Council into the Federal Council. Interestingly, a purely arithmetical magic formula is rejected so that the Federal Council is not politicised: This could lead to the "opposition" increasingly trying to make politics through popular initiatives. There is also no need to deliver a reform of the formula quickly. A new formula should be well thought-out and formed by consensus.

The reason for the magic formula

Until 1943, only conservatives and liberals were part of the Federal Council. There are three reasons for the emergence of the concordance system, where all major parties are integrated into the Federal Council. Firstly, Switzerland is very heterogeneous and has no national population. It was never a nation in the historical sense. The unification into one state took place in 1848 in order to avoid the conquest and occupation by Napoleon again. Switzerland has four languages, a variety of cultures, two deeply hostile religions, and had extremely different forms of government (several monarchies, artisan republics such as Geneva, patrician rule such as Zurich, peasant democracies such as Schwyz and Uri, etc.). A polarizing government would have torn this alliance apart.

The third reason for the magic formula was due to the feeling of threat in the Second World War. The third was the increasing number of referenda against laws. Direct democracy requires much more communication, since the signatures of just 1% of the population can enforce a referendum. The governmental participation of all major factions means that important decisions are usually taken by consensus.

What’s remarkable is that even through several crises, such as when the proposed candidates of a party were not elected or Federal Councillors resigned from their party or were excluded from it, the magic formula has stood the test of time.

The working method of the Federal Council

The chair is taken by the President of the Confederation. They have no prominent function - but represent Switzerland ceremonially at meetings of State Presidents. The President has no authority to issue directives. Only in the event of a tied vote in the Council does the President have the casting vote.

Effects on the parties

The concordance system means that there are no coalitions to elect the Federal Council. Therefore, there are no government factions and no opposition in the Federal Assembly, and logically there is no parliamentary pressure.

Each party works like a non-governmental organisation and promotes its goals. If it believes that a position is capable of winning a majority or should be widely discussed, then it can launch a popular initiative. This is usually done in alliance with other civil society organisations.

The great advantage of this system is that the political debates take place in parliament (legislature) and through direct democracy in the population and civil society. The Federal Council - the "non-government" - remains non-partisan and therefore enjoys a high reputation - similar to the Federal Constitutional Court in Germany. It carries out the affairs of state on the basis of laws passed in parliament or by the people.

Concordance democracy as a model for Europe

Why is concordance democracy particularly suitable as a model for the EU? Europe and the EU is extremely diverse. It is estimated that over 250 languagues are still spoken - the EU alone has 24 official languages. The religions, cultures and history of the peoples are correspondingly diverse - although they have been interwoven with each other for millennia, and always have been influenced by new impulses from the outside.

Collegial council instead of direct election of the president

Nor could this problem be solved by a direct election of the Commission President, as Ulrike Guerot suggests. It is interesting that Parag Khanna, a trusted foreign policy advisor to Obama, considers the direct election of the president to be the biggest mistake of the US constitution, as it divides the country and individualizes the political debate. Rousseau deemed it an "electoral kingdom".

A consensus democracy in the EU with a Collegial Council as the executive would preserve the open atmosphere in the EU Parliament, which is often so productively described today, without the pressure of a parliamentary group, and would be a great opportunity to build trust rather than to enlarge division. The political debates would then become factual debates. This can, of course, be intensified if referendums become possible in Europe and political debates about the future of the continent become possible across the whole of Europe.

A magic formula for the EU

What could a magic formula for a Collegial Council of the EU look like? Currently, the main principle in creating the European Commission is that each Member State sends a Commissioner. Gender is also taken into account. As far as we know, the selection of Commissioners is, for the most part, based on professional competence, not on political orientation. These 28 Commissioners are then distributed among the 33 Directorates-General.

If one takes the Swiss experience of a depoliticized Federal Council seriously, then one should not go in the direction of top candidate procedures because this would lead to polarization in the highest administrative body. Instead, the magic formula would have to provide a political balance.

Overall, it seems to us that the Swiss concordance system pays much better attention to the separation of powers. The administration works quite independently of the political turmoil within the framework of the laws passed by Parliament. At the same time, this liberates the legislature from the constraints of political power struggles. The debates also become more objective in Parliament, because there is no more power to conquer.

Karl-Martin Hentschel, member of the Mehr Demokratie board und responsible for Europe issues
updated by Stefan Padberg, facilitator of the working group in Europe